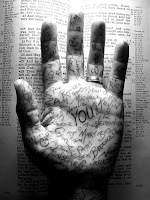 "Can a woman forget her nursing child and have no compassion on the son of her womb? Even these may forget, but I will not forget you. Behold, I have inscribed you on the palms of My hands;Your walls are continually before Me." Isaiah 49:15-16 NASB

[And the Lord answered] Can a woman forget her nursing child, that she should not have compassion on the son of her womb? Yes, they may forget, yet I will not forget you. Behold, I have indelibly imprinted (tattooed a picture of) you on the palm of each of My hands; [O Zion] your walls are continually before Me. Isaiah 49:15-16 Amplified Bible

What a beautiful promise, spoken to Israel, during a period of Babylonian captivity. Their own rebellion had brought them to the place they were in and they felt abandoned by God. Sin rebellion has a tendency to do that because it separated us from Him. Yet it is not the only reason that we, at times, feel alone, forsaken, and abandoned in this world.

In those times, no matter what the situation, it is important to REMEMBER that God's promise for Israel holds true for us as well. Though it may seem that all have forgotten about us and that our life lies in ruins all around us--He never does. We are "indelibly imprinted" on the palm of His hands. Apparently God has tattoos!

How wonderful to find security in knowing that the One who created us will never leave us. He knows exactly where we are in our life. He also knows where we have been and where we are going. In short, you are always on His mind and forever in His hands.

Aw, what a sweet little reminder. I needed to hear that today, thank you for sharing it and aren't we blessed to be imprinted on God's hands? Wow, I am still in awe!!