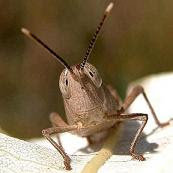 As a person who struggles with chronic illness occasionally I have dealt with something I refer to as "Grasshopper Syndrome." Many have suffered from this ailment along life’s road. Perhaps you've heard of it.

The Old Testament gives a powerful example in Numbers 13: 30-33. Spies had been sent out to explore the land of Canaan and bring back a report. When they returned and reported what they had seen the children of Israel exhibited symptoms of this "dis-ease."

Although the land was plentiful, with sustenance like they had never seen before, the report did not reflect it. The spies had been unable to see it because their immediately focus was on their enemy. The longer they looked at their opposition, the bigger it became. And soon their faith in God was swallowed up. So was their ability to believe that they could conquer and possess the land.

They no longer saw themselves as mighty men of war but instead referred to themselves as "grasshoppers." And strangely enough they were quite easily convinced that their opponents saw them just as they were seeing themselves.

How quickly we deceive ourselves when we believe our own lies. How destructive self-deception can be.


"The truly scary thing about undiscovered lies is that they have a greater capacity to diminish us than exposed ones. They erode our strength, our self-esteem, our very foundation." Cheryl Hughes

What they needed was a change in perception as a cure for their self-deception. This is often referred to as an "attitude adjustment."

The word attitude is defined as "the way a person views something or tends to behave towards it, often in an evaluative way; a state of mind or a feeling; a disposition." How we view something affects our behavior. If our view becomes skewed our disposition changes. This is quite often how negativity begins.

"Attitude is a little thing that makes a big difference." Winston S. Churchill

The children of Israel were in a difficult situation. They were unable to alter the size of their enemies but able to review and revise their thinking about God's past and present faithfulness. Otherwise, they were definitely headed for the ground where real grasshoppers live.

This is never God's plan for His children. He wants our lives to reflect genuine faith in Him.


"And without faith it is impossible to please God, because anyone who comes to him must believe that he exists and that he rewards those who earnestly seek him." Hebrews 11:6

This is something I know a little something about having spent the past 13 years on crutches in a long leg cast. Along with having an injured left foot I've got distonia in my right hand. Bilateral injuries like mine are devastating because all balance is gone which means that I can easily lose my grip--no pun intended.

In my current state I can choose to call myself "a cripple," or I can instead say that I am "temporarily inconvenienced." I can say that I am "unable to do anything because of the tremendous obstacles," or I can say, "I can do all things through Christ Who strengthens me."

Which one sounds better to you? Which lines up more closely with the Word of God? What sounds the most like "grasshopper talk?"

When we act like a grasshopper, others see us that way. When we behave like a faith-filled believer ready to conquer in Jesus’ Name, we are seen that way. How we are seen reflects how He is seen. God can be glorified in our lives by the way we respond to the challenges we face but how we respond depends on our perception.

What is your view of God and His promises to you?

The truth is no matter how big that obstacle is in your life, the Holy Spirit—which is resident in you—is more powerful. Your Father in Heaven is bigger than any foe that you will ever face. The King of Kings and Lord of Lord—in whose image you were created—is the same Almighty One Who lives in you.

Should you run into enemies as you travel towards your "Promised Land" remember the promises of God. Regardless of the giants you might encounter remember you are not a grasshopper. Don’t behave like one, for goodness sake! Reflect His image as He brings you through to that place of rich fulfillment. Just like the children of Israel you are destined for great things in God—don't settle for anything less.

Melinda, I enjoyed reading your blog. Not to take away from your writing, but I got to thinking about the movie, A Bug's Life, and how they overcame their problem with ingenuity and willpower something I'm sure you do every day.

I am glad God introduced us via social media. You are an encouragement and a blessing.