Did You Get The Memo?

"Then God said to Noah,  "Come out of the ark, you and your wife and your sons and their wives. Bring out every kind of living creature that is with you—the birds, the animals, and all the creatures that move along the ground—so they can multiply on the earth and be fruitful and increase in number upon it." Genesis 8: 16-18 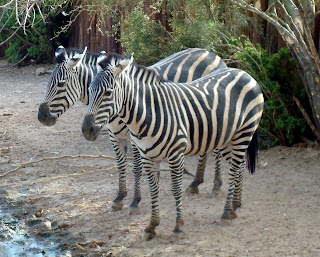 There they stood like statuses--this pair of zebras. They were totally isolated from the rest of the "herd" which is quite unusual for this uniquely patterned species. Normally zebras enjoy mingling. The more the merrier. As I took the photo I could not help but wonder if somehow these two had not "gotten the memo" issued in Genesis 8 to move out and on with their lives.

Then I began to question how many times my life has remained unchanged because I did not "get the memo." In all honesty it feels like I missed a memo or two in recent days. The world is moving forward yet it feels like I am standing still. It's not that I want to because there is so much to see, do, and experience. It's just that I can't clearly discern what is next. On the outside it looks like "business as usual" but on the inside there is a voice shouting "I did not get the memo. What am I missing? What is next for me?"

When I look around it seems like everyone else has "gotten the memo." They seem to have an awesome plan for their life and are moving forward in it. At least that is how it appears. I wonder if appearances are deceiving?


Ever fail to "get the memo?" When did you notice? What did you do?

Melinda, this is so cool! What a neat analogy and deep thinkin' in just a handful of paragraphs.

My son called today concerned that he hadn't gotten mail for 4 days in his new place. Was something wrong? After all, he turned in a change of address. Should he be calling someone? I told him to relax. It just hadn't arrived yet.

I often think I've missed the memo. But maybe it just hasn't arrived yet, and I just need to relax--and wait.

Melinda,
I often wonder if everyone else is experiencing this awesome plan of God in their lives and I've totally missed mine. I have seasons where I feel like I "missed the memo" and am wandering aimlessly around in the desert waiting for a sign.

I think more than anything God wants us to be still and know that He is God and we are not. He will let us know if we "missed the memo" or not.