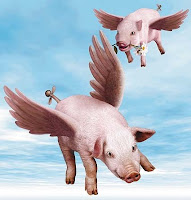 I just returned from a doctor's appointment with the dreaded "offical diagnosis" of H1N1 otherwise known as the "Swine Flu." It was not really a suprise to me as I could almost hear oinking during my endless coughing fits over the past week.

Fortunately there are medications to help with the complications of the flu. My infection & bronchitis should fly the coop soon. Then it will be time to disinfect our stye home. All of this is good news. Yet I can't help but feel a little bit down.

We just had the vacation of a lifetime. We returned with many dreams, plans, & goals which we collaborated on during our 5,000 miles in the car. Seems that illness has quickly put the brakes on everything and it's not the first time, either.

I was just about to have a pity party when I thought back to another time. A time off great difficulty in my life. The testimony I am posting below is very special to me. I pray that as you read it you'll be reminded, as I was today, that God is always "on the scene" in your life. 24/7 He's orchestarting our affairs for His glory and our good. (Rom 8:28-29) When will that change? When pigs fly!

It had been another hard day of intense physical therapy. In a rehabilitation hospital several hundred miles from family and friends, I was waging war against a painful crippling illness and fighting to regain the ability to walk again.

Many times we do not realize the value of something until it has been taken from us. For over 32 years I had begun my morning by placing both feet flat on the floor. That action was as natural to me as breathing until illness robbed me of the ability.

Weary of crutches and walkers, I was determined to take back what had been stolen from me. Consumed with the desire to walk out of the hospital unassisted I pushed myself to the limit daily.

Progress came slow but each day I thanked God for His healing virtue and miraculous power. But then came the wall, that place that could not be pushed thru or pressed past. Busy looking toward my goal, I didn’t see the wall coming and ran into it full force. Now added to the physical pain was an anguish, which no words could express.

As nighttime fell a deep darkness enveloped me. I had hit the wall so hard that my goal of walking became a blurry dark shadow. Thoughts of discouragement quickly turned to despair. Alone with my thoughts, I was taunted by the enemy of my soul.

“Give up…it will never happen…die and put everyone out of their misery…” I was bombarded with negativity as I laid crying in the darkness. Never had I felt so helpless, hopeless, and alone. I finally cried myself to sleep escaping my sorrows temporarily.

Somewhere in the distance a ringing sound grew louder and louder. My sleepy escape was interrupted when I realized that the sound was coming from my telephone. In a fog I reached to answer it. At first the voice I heard seemed unfamiliar but, as I came to, I recognized the caller. Laying face down, still wearing my exercise clothes, I looked at the clock. It was nearly midnight.

The woman calling began immediately to apologize for waking me. We had only met once but she went on to explain that God had laid me so heavily on her heart that she felt compelled to call. Since no incoming calls were allowed after 10 p.m. my mind was boggled. I asked her how she was able to get thru. Apparently she had just dialed the number as usual.

Feeling dazed, I pulled my aching body up to sit on the edge of my bed. It was then that I saw the large blood stain. Then I felt something wet against my skin. Looking down my shirt was soaked with blood. In a very flat tone I added, “I have blood all over me.” Sensing the urgency of the situation the caller told me to call a nurse and that she would go pray.

I called and two nurses came immediately. The look on their faces sparked terror in me. They quickly located where the blood was coming from. The clamp had come loose from my subclavian port and with no tubing attached, blood was flowing freely from it. They clamped the port off and then checked me out thoroughly.

I was literally covered in blood along with the entire bed. But things could have been much worse. The linens could be bleached, my skin washed and my clothing salvaged, but my life could have ended while I slept.

Both of the nurses attending to me were born-again believers. The events of that night moved all three of us to a new level as we discussed the other scenario that so easily could have played out because, under strict orders from my doctor, no one was to disturb me during the night. This was so I could rest and sleep without interruption before beginning each grueling day.

Had the phone not rung, I would not have been checked on until 7:00 a.m., and who knows what the morning nurses might have found. We agreed that the mysterious call, probably saved my life. There was no human explanation as to how that call reached me ithout a switchboard operator--but our hearts knew the answer.

While sitting there pondering things the Holy Spirit brought to mind a Scripture that came alive to me. Psalm 121:3-4 says “He Who keeps you will not slumber. Behold, He Who keeps Israel shall neither slumber nor sleep.” I slept from sorrow in a darkness that was blacker than the night, but not My Heavenly Father. Not the God of My Salvation, not My Deliverer in Whom I trust. He was wide awake and working through people just for me.

As things sank in I felt the weight of hopelessness being lifted from me. Realizing that God had gone to such trouble to spare my life breathed new life into a dying dream. As I sat and watched the sunrise the darkness of my despair was replaced with a new sense of hope.

Many difficult days were ahead of me, but I was forever changed by the reality that God NEVER falls asleep on the job. He doesn’t even take naps. When we find ourselves exhausted and our bodies force us to sleep He is awake and alert, watching and working.

Perhaps you are finding yourself in the blackest night of your life. You feel a sense of hopelessness overtaking you and you are in desperate need of rest. Jesus is extending an invitation to you right now. “Come to Me, all you who labor and are heavy laden, and I will give you rest.” (Matt 11:28)

There is a place of rest in His Arms. No matter how long the dark night of your soul may last He will be watching over you with His eyes of love because He never sleeps!!

When will God close His eyes to rest? WHEN PIGS FLY!

Thank God it's Friday
Is not observed in heaven
God works on weekends
John 5:17, Psalm 121:3-4... This story has no expiration date. Very cool!

What an amazing testimony.I'm grateful God is always awake. Especially,when I think about the half dozen times I've been pushed right over the cliff & God proved to me that people really can fly.

God Bless You & keep you firmly beneath his wings:)